How ’bout a round of applause for ya’ girl RiRi?

Late last week, Rihanna chucked deuces to an offer from the NFL to headline the 2019 Super Bowl Halftime Show — a major move reportedly done in support of Colin Kaepernick, the first to kneel during the National Anthem in protest against police brutality and racial injustices.

According US Weekly, a source exclusively shared that “[Rihanna] said no because of the kneeling controversy. She doesn’t agree with the NFL’s stance,” which has been blatantly unsupportive — so much so, that after the 2016 football season in which Kap launched his peaceful protests and inspired others to join him, he became a free agent and no team would sign him.

Maroon 5 — not the first choice (and maybe not even the second; word is Pink also turned down the gig) — has accepted the offer and is scheduled to perform with some special guests, yet to be announced.

And while Rihanna hasn’t commented on the news of her reasons for declining to perform yet, she has continued to stay woke and urge her fans to do the same. 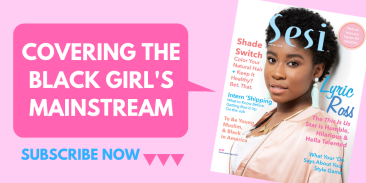 ― Taylor D.
My Tweets
On #MLKDay and every day, we cover the Black girl's mainstream. Shout out to @zandraazariah for being a subscriber since 2015 and love to EVERYONE who has ever subscribed, bought a single copy, or donated to our work. Thank you. ❤ Just hearing about Sesi for the first time and want to support? Subscribe at our link in bio!
Happy 13th birthday, Lidya!! 🎉 (#rg @lidyajewett)
Shahadi comin' through with that #FriSLAY! ✨ (#rg @shahadi)
In remembrance. ❤
Because motivation isn't just for Mondays. 💯 (#rg @notokapp)
Who's got this #BlackGirlMagicMonday? Amanda Gorman. She was the first-ever Youth Poet Laureate and is dedicating her craft to making a difference for the people who need it most. "I believe that now, especially, is a time where we must use whatever spaces, platforms, or skills at our disposal to stand up for what we believe in," she told us in a 2017 interview. "We cannot afford to be silent or disheartened. Now more than ever, we must utilize our communities and networks to advocate for the rights and protection of marginalized groups because there's too much at stake." (📷 courtesy of @amandascgorman)