What went down on the latest episode of grown-ish? Get all the tea with Sesi‘s weekly recaps.

We’re not mad at this week’s opening — a montage of Luca and Zoey being super lovey-dovey as the Delphonic’s old-school slow jam plays in the background: And oh, you’re gonna love me, you’re gonna wanna hug me, and squeeze me … (Tbh, Teyana Taylor’s sample of this same song in “Gonna Love Me” is a bop, too.) Zoey’s voiceover cuts through the R&B to catch us up on her and Luca’s ‘ship status. Basically, ever since she dropped that design class that was filling her spirit with nothing but stress, she’s been living her best (love) life.

Then, one evening after class, Luca comes over with a surprise. Michelle Obama is coming to said design class!

Since #ForeverFlotus is all about showing love to indie designers, she plans to pop into the class to see what the students are workin’ with and possibly choose a look to rock for herself. Obvi, Zoey is shook. “It’s official, I’ve just ruined my life,” she says to the camera.

The next day, Zoey shares this same realization with Nomi and Ana (the latter of the two, btw, has been getting flirty texts from Aaron) at the campus cafe. Before she can explain exactly how she’s ruined her life, though, they immediately guess she must be pregnant. Zo stares them down with some heavy side-eye, squashes that rumor with a quickness, and fills them in on what’s really good.

But she can forget getting any sympathy from this duo — they call her out for only regretting dropping the class because she’ll miss the chance to meet Michelle and maybe, possibly gain some fame. Can we really say we might not consider doing something we weren’t really feelin’ for the chance to meet the first Black First Lady? (Not sure we can.)

Flipping the situation back on Zoey, her girls tell her to check her ego, and instead, think about what M.O. would do — support her man in his dreams this time because he still does have a really good chance to wow in the meet-and-greet. Zoey admits her friends are probs right, but that feeling lasts all of two seconds. Next thing we know, Zo’s giving us all the “bump that” vibes she can muster and begging Dean Telphy to let her back in the lab. He tells her normally, he’d do anything for her, but in this case, it’s out of his hands because the add/drop period has ended, so sorry not sorry.

And now, onto the subplot! Jazz, Sky, Aaron, and Vivek watch as banners for Cash (yep, that one!) and Chasity Ducas (a player on the women’s basketball team) are unfurled over the gym. Sky immediately goes in: “She looks thirsty as hell.” Jazz calls Chasity a “thot in a jersey.” They’re hatin’. Hard. Aaron drags them for their hypocrisy — how are they gonna claim to be all about women’s sports and supporting female athletes, but be mad judgy about this girl? — and invites them to watch one of her games before deciding whether she’s a serious player or not. Vivek and the twins bounce after this, as Aaron is distracted by his phone — another incoming text from Ana.

Anyway, after her failed attempt at landing a spot back in the lab for the sole purpose of meeting Michelle Obama, she settles for assisting Luca in what may be one of the biggest moments of his life. She strolls into the lab bearing gifts — a dirty chai latte, Luca’s fave. He takes a sip and then tosses both of their drinks straight into the trash. “Did you forget the rules? There’s no liquids in here,” he says. (Welp, this is off to a good start, we think sarcastically to ourselves.)

Zoey sees this as a direct disregard for her ideas, and things only go further south from there. But even after one too many micromanagement episodes and instances of her words being taken out of context, Zoey decides to “go high” just as her fave Michelle would.

Cut to Chasity’s basketball game, and Jazz and Sky are surprised at how many people are in the stands — way more than they see at their track meets, apparently. It’s true, most of the crowd is dudes and they’re mainly there to admire Chasity’s looks, but there’s no denying she has some skills on the court, too.

Meanwhile, Zoey’s still supporting her guy in his design endeavors, and right now, that means rockin’ an Elizabethanesque collar. When she tries to suggest a different stylistic direction, you know, one Michelle would be more inclined to wear, Luca claps back that he’s not about that “mass-produced mercantile” life. And with that, Zoey dips.

Over at the basketball game, Jazz and Sky are still going in on Chasity and claiming the only reason she has a banner versus one of her other teammates is because of her looks. Aaron and Vivek also show the twins Chasity’s social media — she has hella sponsorships. (Don’t Jazz and Sky, though, too? They did last year — they even got caught trying to resell items they received for those sponsorships. So, why are they acting all brand new now?)

When Nomi and Ana come back to the apartment later that day, they’re surprised to find Zoey chillin’ on the couch with a bag of chips. Ana asks why she’s not in the lab helping Luca, and Zo spills all the tea: He’s trippin’. Then, a text. From Luca. “Hey, I need u. Pls com back,” it says.

Reluctantly, Zoey heads back to the design lab and finds Luca smoking and lying on his back across a table. There’s trash all over the floor, and the only intact item nearby is the collar that’s doing too much. Luca announces: “I quit.” Now, it’s Zoey’s turn to be the encourager. She tells him he can’t give up — he’s the only “genius” in the class. Turns out, that label is exactly what’s got him stuck. “Whether people call you that or not, it’s true,” Zoey says. “I get that you’re overwhelmed right now, but watching you work, it’s inspiring.” Cue another montage: Together, Luca and Zo start work on the dress for Michelle’s class visit. After putting in a few good hours, Zoey suggests he sleep on it and figure out the rest in the morning.

Still stuck on the whole Chasity thing while working out in the gym later that day, Jazz tells Sky they should get in on the sponsorship game, too. Sky says she only wants to be known for her athletic skills, not her body. Jazz reminds her they’re not being recognized for either at the moment, so an image level-up just might be the move.

Finally, it’s Michelle Obama Day! Arriving early to the lab, Luca sees Zoey adding some last-minute touches to his dress — a jacket, some cute shoes, and some tulle. “It’s perfect,” he says.

FloMo (just go with it) comes and goes, and while Zoey is still sad she didn’t get a chance to meet her biggest inspiration, she’s mad happy for her bae. Michelle loved his design — and Luca let it be known that his girl Z helped him out. His surprise to Zoey this time? An autographed message from #ForeverFlotus herself, written on the bottom of one of Zoey’s shoes. They hug it out.

Catch up on the episodes you’ve missed here. 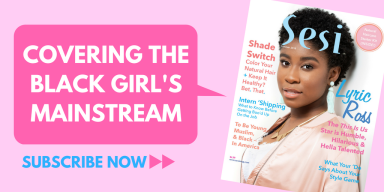